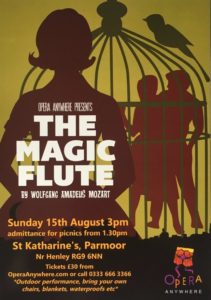 Tickets only available from : https://www.ticketsource.co.uk/operaanywhere/t-zrdmdr

An outdoor performance – bring your own chairs, blankets, waterproofs etc!

The Magic Flute: A young man with a passion for reading discovers a book about a fantastical world in which cruel darkness is defeated by the light. Drawn in by the magic of the story, he becomes lost in his own adventure. On his journey, he meets the Queen of the Night and her rival, the mighty Sarasto, high priest of the sun.

The Queen and her Three Ladies charge him with a quest: to rescue the Queen’s beautiful daughter Pamina, who has been kidnapped by Monostatos, a mean and greedy servant working for Sarastro. Guided by Three Boys and accompanied by the bird-catcher Papageno, Tamino sets out on a journey in search of love, truth and honour.

Marrying Mozart’s beautiful music with a witty script, this production of The Magic Flute celebrates the birth of teen culture in this timeless coming-of-age story delving into the other-worldliness which glamorous Hollywood brought to post blitz London.

“ Thank you for a wonderful afternoon tea. ”

“ Thank you for having us! Great stay, lovely garden and helpful staff. See you again next year. ”

“ The success of the weekend was helped ... by the quality of the accommodation ... the generous provision of our food but perhaps most of all the staff ”

“ This has been a wonderful caring time. Thank you St Katharine's staff team. ”

“ Thank you so much for everything that you and your team did for our family yesterday. Everything went so smoothly and everyone said what a wonderful venue St Katharine's was both in terms of food and venue. Your team were absolutely outstanding and made the day very easy for us. ”

“ Thank you for a wonderful stay. It was perfect. The memorial garden is wonderful and so good to have time to sit and appreciate the atmosphere. ”